The goal of "General Changes Mod" (GCM) is to modify certain aspects of the gameplay to bring the game closer to that of real-world weapon systems as possible, while keeping the balance. Also more cheat codes are being added to add additional fun to the game, for people who are doing offline skrimishes and single-player games. 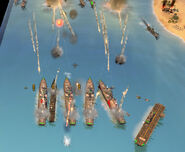