The M2A3 Bradley IFV is an American infantry fighting vehicle in service during the Oil Crisis and the Day of the Consortium.[2]

The M2A3 Bradley is the perfect fighting vehicle for hit-and-run attacks on weak enemy positions.

Featuring medium armor, a 25mm Bushmaster cannon, and healthy speed, the Bradley always moves better in groups of three or four. It's also useful for transporting infantry behind enemy lines.

While its gun is not as strong as that of its counterparts, it makes up for a quick rate of fire between reloads. Also, it has a tendency to wound infantry, leaving them vulnerable to capture.

In High Treason, the Bradley can be upgraded to be able to switch between their Bushmaster cannon and TOW guided anti-tank missiles, making them more effective at fighting enemy armor. 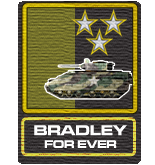