Appears in campaign only.

The MiG-21 Fishbed is a supersonic jet fighter aircraft designed by the Soviet Union.

During the uprising in Russia, Task Force Talon has to destroy a squadron of them before they take off from an airfield during the assault on the rebelling 11th Corps main base.

When Richter receives Russian reinforcements later in the war, the Russians somewhat amusingly employ a squadron of MiG-21s to assist the counterattack, even though the Russian Air Force is no longer an operator of this plane. 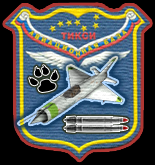