This unit can snipe, ambush, crawl, capture and occupy buildings.

The sniper is the ultimate sharpshooter of the US Army. A good sniper can kill most human targets with a single bullet. He is perfect for scouting, capturing enemies, and performing stealthy missions.[1] 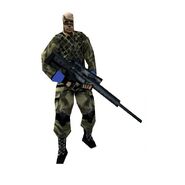