The United States Marine is the standard infantry unit of the U.S. Army. Well trained and well armed, the Marine is good at assaulting and defending in buildings.[2]

Marines are fast, and a full squad can be a threat to low-flying helicopters. You can ask a Marine to crawl, hide, ambush, and capture prisoners of war. They are also fairly priced.

Marines can also be upgraded with M203 grenade launchers (from the Barracks in Direct Action; for each individual Marine in High Treason), which gives them a bonus bit of burst damage when fighting clustered infantry, light armor, and helicopters. Although it takes a while to reload and not ideal, this will give US Marines a better chance against vehicles and inflict a serious hurt against elite infantry when they have to. 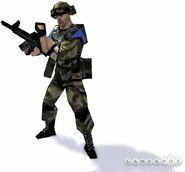 Preview render
Add a photo to this gallery

Retrieved from "https://actofwar.fandom.com/wiki/U.S._Marine?oldid=11537"
Community content is available under CC-BY-SA unless otherwise noted.